The Vegetarian has a striking cover. Shallow though it seems, that was the first thing I noticed and liked about this book. It would catch my eye every time I visited my favorite local bookstore, so I would pick it up and read the dust cover again and again. The premise was interesting, and I don’t have much experience reading the works of Korean authors, but I somehow always talked myself out of buying the book. Luckily, my boyfriend unwittingly got it for me as a birthday gift, most likely because I’m a vegetarian and he thought I could relate to whatever was inside. And I’m so happy he did, because I ended up loving this book – 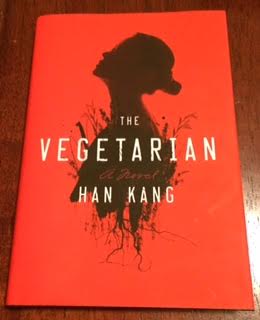 not because of my personal food preferences, but because it is so very, very good. There are many layers to The Vegetarian, and I imagine it could be interpreted any number of ways; I’m pretty positive I could write an entire critical essay on this book. It is incredibly nuanced, and I felt a range of emotions – some identifiable, some not – while reading. I was mystified. I was hopeful. I was sad. I was genuinely frightened by the time I reached page 15 (though as someone who can’t even watch the preview of a contemporary horror movie without having nightmares, you can take that with a grain of salt). In sum, I was so moved by this book that I was compelled to write a more serious review of it.

Han Kang’s The Vegetarian is a haunting, quiet, and strange piece of literature that both frightens and fascinates from the first page. The three-part story centers around a woman named Yeong-hye whose recurring, carnivorous dreams impel her to renounce meat and and adopt a vegan lifestyle. However, as Yeong-hye becomes more detached from her physical body and the world in general, we see her lifestyle choice slowly morph into something more sinister.

Each section of the book focuses on one person in Yeong-hye’s life as he or she attempts to make sense of her radical behavior. Yeong-hye’s husband, brother-in-law, and sister are the most deeply affected by her actions, and we witness their utter and complete helplessness drive them to make a number of rash decisions, with devastating consequences. Forced to look at the ugliest parts of themselves, those closest to Yeong-hye begin to slide into their own personal versions of madness and despair.

Over the course of the book, even the reader becomes estranged from Yeong-hye’s truest thoughts and motives. While she calmly slips further away from the corporeal world and deeper into the spiritual one, we learn more about the abuses Yeong-hye has faced, and how they have led to this moment in her life. The question is not whether she is losing her mind, but instead whether her method of finding and accepting her truest spiritual self is worth the cost to everyone involved.

Reading The Vegetarian is like stumbling through a dark forest teeming with unknown beasts; there is a monster lurking in the shadows, and only in the end do we truly begin to see its many rows of teeth. Kang has crafted a moving, unsettling, unpredictable story that begs to be read over and over again.

Those who enjoy magical realism, haunting story lines, and books that can (and should) be read repeatedly.

One thought on “Book Review – “The Vegetarian” by Han Kang”